We all need to feel we have purpose and value.

If you know someone who is depressed, will you go that extra mile?

Don’t wait for them to reach out, they probably won’t. They’re already feeling a burden and that the world is passing them by. Don’t tell them “I’m here for you if you need me”. They do need you. Don’t make them lose any more dignity than they’ve already lost. Show them that you know they need you and you’re there by reaching out. 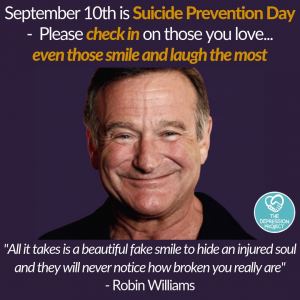 Build them up through inclusion. Cancel a plan to go spend time with them. Listen to what they’re feeling. Don’t offer advice or remedies. Just be present for them. This is what can pull them through. When it’s time for you to go, they’ll return to their lives, ultimately they have to makes the changes themselves, but your presence may be the first gift they’ve had in a while that tells them there’s light at the end of that dark tunnel.

What does someone want when they’re feeling depressed? They just want life to return to how it was before they were depressed. And they’re too sad and don’t know how to make that happen for themselves. If they did, they would. But they don’t have the energy to do that yet. It’s not called depression for nothing. Every bit of motivation and energy that person had has been pressed down within their body, mind and soul. A little bit of genuine warmth and affection, a gesture of you caring enough to make time for them, to go and ask how they are, to tell them you’re thinking about them and want to know how they’re doing, may be the start of them talking and finding solutions.

When people are depressed they’re super sensitive to others. They know when you’re half present or just going through the motions. It makes then feel worse. Even less than they already feel. The most valuable thing we have is our time. It’s the one thing we’ll give to another that we’ll never get back. And the person you’re sitting with feels that gift. When u give yourself fully to another human who’s feeling alone, they’ll remember that thats what was the start of what got them through. They won’t wonder does anyone care, they’ll know you do through your actions. And one day, they’ll know exactly what to do for another who’s in the same boat.

The cure for depression? Awareness and thoughtfulness on behalf of those who aren’t. It could be you tomorrow. What would help you? That’s exactly what’s needed!